For readers who think my son Leon is a little sweetie, or those of you who know the older version and think of him as a lovely, smiley (not-so) young man, ever ready to lend a helping hand, think again my friends, because the little b@$!@~d keeps beating me!

I kid you not.  It’s been happening quite a lot lately and I’m not sure how to cope with it.  Only yesterday the bugger beat me at Carcassonne, then Scrabble and finally thrashed me 3-0 at Rummikub!

I know, it’s utterly outrageous.  That’s the thanks I get for teaching him so well when he was a little snot-nose.

And if that’s not bad enough, he almost caused me to have a heart attack this morning.

I was sitting outside on a sunny Spanish day.  It was lovely and peaceful, well relatively, with the only sounds coming from the birds hurling their discarded pine-nut shells onto the patio roof and our Spanish mastiff snoring on the sofa. I sat quietly checking my emails when completely out of the blue (or door behind me) a noise so outrageous almost sent me soaring skywards.

No, it wasn’t our Labrador, but Leon shouting woofing noises at the top of his voice.

When I climbed down off the rafters I asked him what the hell he thought he was doing, scaring the living daylights out of his mother like that.

“I’m trying to frighten that bloody dog awake, like she’s been doing to me in the early hours of the morning these last few nights!  WOOF, WOOF, WOOF, WOOOOOF.”

“In the end I brought her into my room.  But after five minutes of settling back down in bed I still couldn’t sleep – because of her snoring!  WOOF, WOOF, WOOF, WOOF!”

I glanced across at the recumbent mastin as she still lay on the sofa, softly snoring.

“Well it didn’t work” I pointed out. 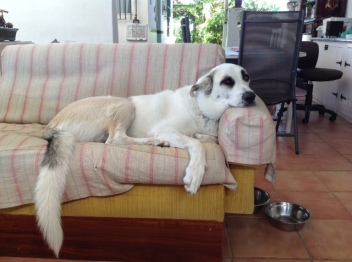